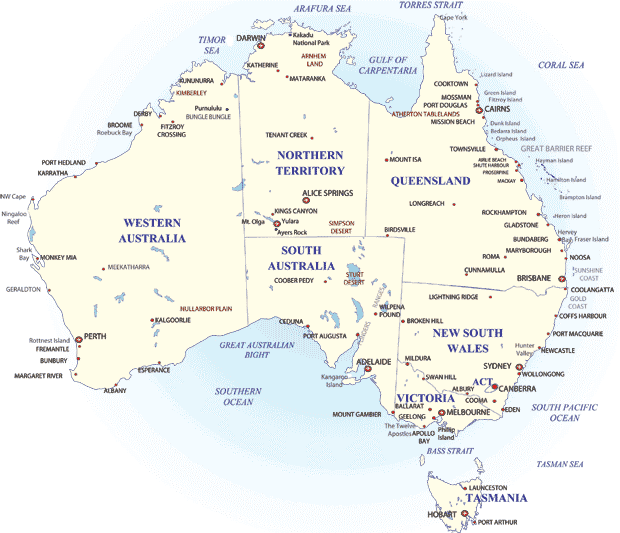 ​Climate
Australia has the opposite seasons than the Northern Hemisphere.  The summer months of December to February the weather in the north of the country is very tropical and experiences monsoon weather, whereas in the southern States, it is a very dry heat and generally sunny. Over the winter months between June to August the northern states are very dry whereas the south experiences its wettest periods with snow falling on the highest alpine regions in New South Wales and Victoria.

Shopping
Australia’s major capital cities have a variety of complexes to find a bargain.  Whether it be funky boutiques, designer labels you’ll find them in a range of shopping malls, arcades, department stores, and local markets.  Shopping hours are generally from 09;00am to 18:00hrs with late night shopping in major cities on a Thursday or Friday night.

Banking
Australia’s currency is the Australian Dollar (AUD) and has both notes and coins.  Denominations of notes are $5 (pink), $10 (blue), $20 (orange), $50 (gold) $100 (green).  Coins are 5c, 10c, 20c, 50c, $1 & $2.  Currency exchange is available at hotels, banks and international Airports.
The most commonly accepted credit cards are visa, MasterCard, American Express and Diners Club Cards. Banks are open Monday-Friday 9am-4pm, with limited banks opening on a Saturday morning from 9am-1pm.

Tipping and Bargaining.
Hotels and restaurants do not add a service charge onto bills.  Tipping is at your discretion and at more upmarket Hotels and Restaurants it is a general rule to add 10% of the bill for good service.  It is not a general custom in Australia to bargain for goods.


Hotel Check in and Security Bond:
Upon check-in many hotels require a security bond in the form of a credit card imprint. Please ensure that your clients are aware of this requirement.

Communication
The Australian official language is English.  Languages other than English which are common in our communities are Italian, Greek, Cantonese and Arabic.  Some sightseeing companies will offer their tours in a language other than English.

Driving
Australian’s drive on the left-hand side of the road.  A current drivers license must be held in order to hire a vehicle in Australia.  Should the license be written in another language other than English, a certified English translation must be presented as well.  Seat belts must be worn at all times.  Speed zones should be adhered to as police cameras operate throughout Australia. 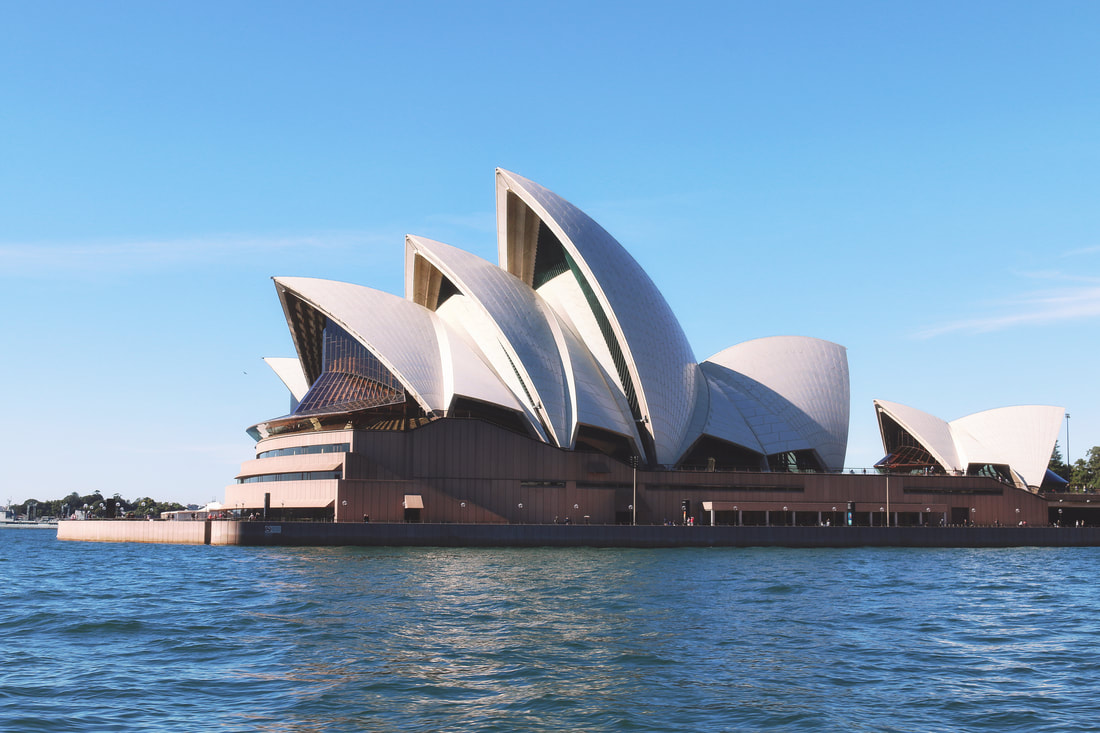 Sydney is the oldest, largest and (some say) most beautiful city in Australia and is memorable for far more than its famous landmarks. Created around one of the world's most dazzling harbours, there's no doubt that the Sydney Harbour Bridge and Opera House deserve their dues. Enjoy its legendary beauty, its laid-back outdoor lifestyle and icons such as the Sydney Opera House, the graceful span of the Harbour Bridge and the golden sands of Bondi.
​

Wednesday   29 Jan 20  Arrive Sydney (L)
Sydney, capital of New South Wales was founded in 1788 and is Australia's oldest city. Sydney sits astride Port Jackson, one of the most beautiful deep-water harbours in the world. With a population of just over 4 million, Sydney is also Australia's largest city. The city boasts famous landmarks such as the Harbour Bridge and the Sydney Opera House, as well as a fine array of restaurants, theatres, shopping complexes and some of Australia's best surfing beaches.

On arrival to Sydney and after clearing Immigration and Customs formalities, exit into the public area where you will be met by your local guide. You are then assisted to your private air-conditioned coach to commence a half day city tour enroute to your hotel.

Depart the airport drive by the southern beach suburbs to Sydney’s most famous beach, Bondi.  You will have some time to soak up the atmosphere of this beachside Mecca.  Stroll down the esplanade with the locals before we make our way to the Bondi Icebergs Club for a casual lunch

Depart Bondi and drive through some of Sydney’s most affluent suburbs. Pass by
Vaucluse, Watsons Bay, Rose Bay and Double Bay before driving to Mrs Macquarie’s Chair situated on the water’s edge, with magnificent views of the Sydney Harbour Bridge and the Sydney Opera House.

Pass the NSW Art Gallery, Hyde Park Barracks and St Marys Cathedral and onto your hotel for check in.   Tour concludes at your hotel

Remainder of the afternoon is at your leisure

Plan an unforgettable escape to the Sydney Harbour Marriott Hotel at Circular Quay. Whether you're here for business or on a relaxed family holiday, we'll make you feel at home, with luxurious accommodation and an unparalleled commitment to service. Spacious, gorgeously appointed rooms and suites boast modern design, plush bedding and large flat-screen TVs; many also feature awe-inspiring views of Sydney Harbour.

Start your morning with breakfast at Silvester's, or toast a successful afternoon with a drink at the historic Customs House Bar, located here in the hotel.

You're just moments away from some of Sydney's top attractions, including the Opera House, George Street and The Rocks. We can't wait to welcome you here to the Sydney Harbour Marriott Hotel at Circular Quay.

Join your guides for a walk through the historic Rocks precinct. Witness the birth-place of Sydney and explore the convict built cottages, pubs and the first church in Australia. Wander down hidden alleyways, into shady courtyards, along cobbled lanes, discover the nooks and crannies, get up close and personal with the living history and heritage of Australia's first British settlement.

Lunch at Squire’s Landing at the Northern end of the Overseas Passenger Terminal, Circular Quay West, The Rocks 2000
Almost 230 years ago, the first fleet arrived at Sydney Cove and a convict named James Squire stepped ashore in chains. He didn’t know it then, but this chicken-stealing highwayman had been presented with a remarkable opportunity. A charmer, a swindler and a cunning rogue, James would go on to become the father of Australian brewing – and a bona fide legend.

Make your own way back to your hotel at your leisure.

This evening join your tour leaders (no local guides) and walk down to Circular Quay, Jetty no.6.  Please arrange to check in at the Captain Cook Cruises ticket office 30 minutes prior to departure.

Evening: Captains Dinner Cruise (NO LOCAL GUIDES)
Board your Captain Cook Cruises vessel at your selected departure point (Jetty 6 Circular Quay or Jetty 1 King Street Wharf) to commence a Captains Dinner cruise. Travel aboard MV Sydney 2000 or John Cadman 2 and enjoy stunning views of Sydney Harbour whilst enjoying a 3 course a la carte dinner. After dinner, enjoy live music and dancing or star gaze from the open deck as the lights of Sydney city twinkle in the background. Cruise concludes at approximately 9.30pm at Circular Quay (10.30pm on Saturdays, and Fridays from November to March).
Friday       31 Jan 20  Sydney (B/D)
Buffet breakfast is included at your hotel

Depart Sydney and travel west to Featherdale Wildlife Park which is home to more than 2200 animals from 230 native species all in a natural bush setting. You’ll have a chance to hand feed a kangaroo, wallaby and emu or enjoy a face-to-face encounter with one of our friendly koalas. There are also wombats, wallabies, dingoes, possums, owls, Tasmanian Devils a wide array of birdlife throughout the park. Don’t miss seeing the 4.5 metre crocodile!

The Sydney Opera House Tour - Afternoon
The Sydney Opera House is one of the world’s most recognisable landmarks and this is your chance to truly get up-close. Run your hands over the world-famous shell tiles, take a seat in the elegant custom-made white birch timber chairs and marvel at the vaulted ceilings. Visit areas off-limits to the public and capture photographs from rare vantage points. Explore theatres and foyers where more than 1600 concerts, operas, dramas and ballets take place each year.   After the opera house tour, walk back to your hotel

This evening, join your local guide and driver for transfer to restaurant for dinner
Dinner at 360 Bar and Dining - 3 Course Dinner (or similar) Beverages at own expense

After dinner, you will be transferred back to your hotel
Saturday    01 Feb 20  Sydney (B)
Buffet breakfast is included at your hotel

Join your local guide and driver for private coach transfer to the Overseas Shipping Terminal to join your cruise.

​Non-refundable Deposit of $250 per person required to confirm reservation.

NOTE – If we have less than 10 people, we will still offer the tour but will need to secure non-group pricing.
Cancellation Fees
​
Individual Cancellations:
If one or more individuals cancel the group may have to be re-priced based on lower passenger levels. Individuals will forfeit all monies paid up to the date of cancellation.